Get closer to the powerhouse of Roadmap IT Solutions (P) Ltd, and know more about
the values cherished by them…
Feel the vibes of the tangible hands that give birth to the precious intangible ERP service

Devabalan was born in Gingee, a panchayat town in Villupuram district, Tamil Nadu. Devabalan’s father, Mr. Selvaraj, is a tailor,

Devabalan was born in Gingee, a panchayat town in Villupuram district, Tamil Nadu. Devabalan’s father, Mr. Selvaraj, is a tailor, and his mother, Mrs. Ambika is a homemaker. Born in the year 1992, Devabalan is the elder of the 2 sons born to his parents. Deva’s parents moved to Pondicherry pursuing better business prospects even before he started schooling. Thus, he landed in Pondicherry and passed his Matriculation and Higher Secondary from Fatima Higher Secondary School and Amalorpavam Higher Secondary School respectively. Subsequently, in the year 2009, he joined Asan Memorial College of Engineering and Technology in Chennai and, in the year 2013, successfully procured his B.E in Electronics and Communication. After graduating, Devabalan worked as a probationer in a couple of companies before being referred to Roadmap by a friend. He joined Roadmap in the year 2014 in the QC division. Today, he has climbed to the level of a Senior Quality Engineer and has successfully handled ERP projects in India and abroad. Devabalan is all praise for the scope provided by Roadmap to develop his professional tenacity and skills to tactfully and patiently overcome any type of hurdle that may arise in the process of executing his projects. His exposure to new technology and concepts during the course of his professional journey with Roadmap has enriched his professional knowledge claims Devabalan. 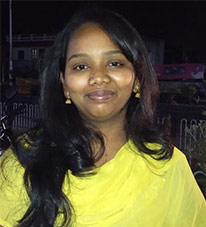 Priyadarshini hails from Cuddalore, a famous port town adjacent to Puducherry. A native of Cuddalore by birth and domicile status,

Priyadarshini hails from Cuddalore, a famous port town adjacent to Puducherry. A native of Cuddalore by birth and domicile status, she was born to Mr. Kuppuswamy and Mrs. Rajalakshmi in the year 1988. Priyadarshini pursued her preliminary and Higher Secondary education at St. Joseph’s Convent, Cuddalore. Subsequently, she joined Adhiyamaan College of Engineering, Hosur in the year 2005. Here she majored in Electronics and Communication and successfully gained her Bachelor’s Degree in Engineering (B.E) in the year 2009. Today, Priya is happily married to Mr. Velu and is blessed with 2 daughters Yashika and Kaavya. Polaris Consulting & Services Limited, Chennai was Priyadarshini’s first employer, with whom she had a flourishing career for almost 3 years as a software specialist in the Storage Domain. Propelled to address her maternity concerns, she came down to Cuddalore and in her search for IT companies in and around Cuddalore, found Roadmap IT Solutions (P) Ltd., Puducherry. Priyadarshini joined Roadmap in the year 2012 as a Testing Engineer in the then newly created QC Team. A novice to ERP, she learnt the nuances and intricacies of the Product right from scratch. With the knowledge acquired through the course of the past 6 years, she now pioneers in digitally designing, sculpting, and rendering the Product flawless. Priya claims that the trust, liberty, and responsibilities vested upon her by the Management and the senior staff of Roadmap has refined her skills, has empowered her with the capacity to shoulder responsibilities, and has given her the opportunity to explore new avenues and acquire leadership qualities. She greatly appreciates the company’s feel at home environment and the multi-faceted support that the Management is always willing to offer its employees.

Sr. Network & Systems Administrator, Roadmap IT Solutions (P) Ltd Sathish Srinivasan was born in the year 1986 as the second boy child of Mr. Srinivasan and Mrs. Prema. Though his parents hail from Tamil Nadu, by virtue of their jobs, had to settle down in Puducherry. Thus, born and brought up in Puducherry, Sathish did his schooling initially in Seventh Day Adventists School and later in Arul Sasthalaya. Sathish went on to pursue B.Tech Computer Science in Bharathiar College of Engineering and Technology, Karaikal, and successfully completed the course in the year 2007. Right after gaining his Engineering degree he started his career as a Systems Engineer and also gained the CCNA and MCSA certifications alongside. After rendering his services for 2 different employers in a span of 7 years, as Sathish was aspiring for a career abroad, a mishap in his family clipped the wings of his aspirations. In the year 2014, as advised by a well-wisher to his family, Sathish joined Roadmap IT Solution (P) Ltd, as Systems Administrator. Today, he is the Senior Network and System Administrator at Roadmap, and is married and blessed with a son, Krishva. Sathish is very happy to be with Roadmap and asserts that his tenure in Roadmap, thus far, has given him immense job satisfaction. The vicinity of his residence from the office and the great work and life balance provided by the job, augment the overall goodness of his career with Roadmap is Sathish’s strong belief.

Vinoth is an outright Pondicherrian by birth, lineage, locality, and profession. His father, Mr. Dhanasu is a ‘Building Supervisor’ in Kuwait, and his mother, Mrs. Thiripurasundari is a homemaker. Born in the year 1994, Vinoth has a younger sister, who is pursuing her B Tech. Vinoth schooled in Amalorpavam Higher Secondary School, and later successfully completed his B Tech in IT at Ganesh College of Engineering, Puducherry. One of the achievements of Vinoth during his graduation is the publication of the article titled EAgro Crop Marketing for Farming Community (2015) in the prestigious “International Journal in the Foundation of Computer Science and Technology”. Referred and recommended by well wishers, and propelled by the need to stay with his family in Pondicherry, Vinoth joined Roadmap IT Solutions within a month of his graduation in the year 2015. Today, Vinoth is an accomplished Software Developer at Roadmap and claims that the secret of his productivity lies in the ‘feel at home’ experience even when he is at Office and the positive value and energy he gains whenever he seeks the advice of Roadmap’s MD, Mr. Kabilan. Vinoth asserts that he is happy to be in the Roadmap environment where his Team superiors are very accessible and helpful. Vinoth takes pride in the professional liberty given to him by his superiors, which he believes, has enabled him to develop his skill sets and has widened the scope of acquiring enhanced professional experience.

Mr. Thillaiarasan hails from Chinnapudhupattu, a village near Thirubhuvanai in between Puducherry and Villupuram. Born to Mr. Arunachalam and Mrs. Shakunthala in the year 1975, he belongs to a purely agricultural family. He did his early schooling at Hindocha Charitable High School, Ariyur. After successfully completing his Higher Secondary education and Under Graduation at St. Joseph’s College, Cudallore, Mr. Thillai scurried on to begin his Accounting career as early as the year 1996. In the year 2016 as per the advice of a well-wisher, one of his ex-bosses, he joined Roadmap IT Solutions Pvt. Ltd as Accountant. Happily married with one son, today, Mr. Thillaiarasan is one of the successful and satisfied employees of Roadmap IT Solutions Pvt. Ltd. He asserts that only after joining Roadmap his work and life are perfectly balanced and that he is well-off in all the facets of his life. Further, he claims that his career with Roadmap has exposed him to new arenas that have led him to learn many accounting nuances.